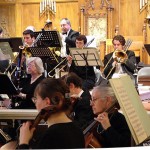 50-Year History of the

(by Bonnie Bogue, Member of Prometheus since 1966)

The Prometheus Symphony Orchestra celebrates its 50th Anniversary Season in 2014-2015. What began as an temporary undertaking in 1965 has matured into a respected, all-volunteer orchestra that plays a significant role in the cultural scene of Oakland and the East Bay. Here is our story.