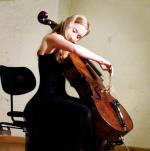 Tessa Seymour (cello) was named co-winner of the Khuner Concerto Competition in 2005, playing Boccherini’s Concerto in B flat major. Tessa had also received first prizes in other competitions, including the American String Teachers Association competition, Pacific Musical Society Annual Competition, Stewart Brady Competition, and the San Francisco Symphony Youth Orchestra’s 2007 Concerto Competition, which included a performance at Davies Symphony Hall. She was also selected to compete in the Concours de violoncelle Rostropovitch 2009 in Paris. NPR’s From the Top awarded her its prestigious Jack Kent Cooke Young Artist Award in 2006.

Tessa studied with Jean-Michel Fonteneau in the Preparatory Division at the San Francisco Conservatory of Music before she entered the Curtis Institute of Music in 2010 at the age of 16, where she studied with Carter Brey, principal cellist of the New York Philharmonic and Peter Wiley of the Guarneri Quartet. In the spring of 2015, she presented her senior recital at Curtis.

Tessa Seymour’s cello is the 1720 Carlo Giuseppe Testore “Camilla.” Her remarkable performance schedule began before she was 10 years of age, including NPR’s From the Top in 2004 at age 12 with the Luna Trio.  She played for the Dalai Lama at the Bill Graham Auditorium in San Francisco, performed at Beijing’s Central Conservatory of Music, appeared as concerto soloist with the St. John’s Chamber Orchestra, Modesto Symphony Orchestra, Fort Wayne Philharmonic, Curtis Symphony Orchestra, and Prometheus Symphony Orchestra, among others. She has studied at many distinguished summer programs including the Yellow Barn Music Festival (international center for chamber music), masterclasses at the Académie de Villecroze in France, Académie Musicale de Morges in Switzerland, Napa Valley’s Festival del Sole, and Switzerland’s Verbier Festival Academy where she won the Jean-Nicolas Firmenich Prize for cello. While at Curtis, she played at Washington DC’s Kennedy Center and at Carnegie Hall.

Tessa Seymour has made her mark as a professional musician by collaborating with contemporary composers and premiering new works. While a student at Curtis, she performed a U.S. premiere of Polish composer Krzysztof Penderecki’s Suite for Solo Cello. She has since collaborated with and premiered original works by John Adams, David Matthias Pintscher, David Ludwig, and Richard Danielpour. In 2017, she shared the stage with John Adams when the Berkeley Symphony presented her premier performance of William Gardiner’s cello concerto, which was written for her, in a concert that also honored Adams’ 70th birthday.