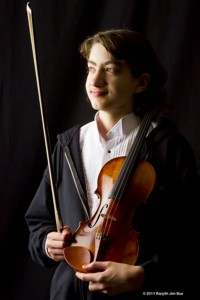 Stephen Waarts (violin) was named co-winner of the Khuner Young Artists Concerto Competition in 2010 when he was 13 years old (he was just 12 at the audition). Prometheus enjoyed playing with Stephen so much that we asked him to return twice—first for the Beethoven Violin Concerto in D Major, Op. 61, and again for the Alban Berg Violin Concerto, “To the Memory of an Angel,” a challenging piece for a violinist of any age.

Stephen, a Bay Area native, started violin studies at age five, with Krishnabai Lewis and Jenny Rudin, and began piano at age eight. At 14, Stephen simultaneously graduated high school and the San Francisco Conservatory Preparatory Division and was accepted at the Curtis Institute of Music in Philadelphia, where he holds the Frank S. Bayley Fellowship. There he studies with celebrated violinist Aaron Rosand, with whom he had been collaborating since 2010. He also studies piano with Annie Petit, while pursuing his Bachelor of Music degree and participating in chamber groups and the acclaimed CIM orchestra. On visits to the Bay Area, he continues his collaboration with previous violin teachers, including world-renowned Li Lin and Alexander Barantschik, Concertmaster of the San Francisco Symphony

While still in his teens, Stephen achieved an international reputation for his artistry, performing throughout the US and Europe, using a c.1750 Pietro Guarneri II violin, on loan through the Stradivari Society of Chicago. His repertoire includes over 40 concertos. Venues in Europe and the US have included Weimar Hall in Germany, Moscow State University, Teatro Gayarre in Spain, Oslo Conservatory, Carnegie Hall, Herbst Theater in San Francisco, Ford Amphitheater in Los Angeles, and Field Concert Hall in Philadelphia. He performed with the Staatskapelle Weimar Orchestra, Navarra Symphony, Kostroma Symphony, San Francisco Chamber Orchestra, and scores of other orchestras, including Northern California’s Prometheus Symphony, Redwood Symphony, Silicon Valley Symphony, Saratoga Symphony and Winchester Orchestra of San Jose. Since 2010 he has been part of the Itzhak Perlman Music Program. He has participated in the Music@Menlo chamber music program.

Stephen also cemented his international reputation by winning multiple international violin competitions: both audience prizes and jury laureate prize in the Queen Elizabeth competition; First Prize, the Bach Prize and the Composer’s Prize at the 2014 Menuhin Competition; First Prize and six additional awards in the 2013 Young Concert Artists International Auditions, Second Prize and the Audience Prize in the 2013 Montreal International Competition, among others. Critical acclaim includes the following: UK’s Daily Telegraph commented “..something special,… not just the mechanical wonder, but a soul.” The Strad magazine: “from the first note… I was hooked, and within a few bars I was moved to tears… such an experience is rare… Although it is possible to analyze it (Waarts’ playing)… perhaps it is better not to try… truly poetic and sincere.” San Mateo Daily Journal: “the emotion-evoking quality of his sound… bring me to tears with that rare beauty” …  “extraordinary technique”. The Southern California reviewer Baruch Cohon: ”Hands down hit of the evening was the young violinist Stephen Waarts…delivered a masterful performance of a complex and demanding work….”

Apart from his musical interests, Stephen is an enthusiastic mathematician (winning national math awards) and a visual artist. Learn more at his website: www.stephenwaarts.com. (Resume updated by Concerto Committee in 2016 from reliable online sources.)

In January 2011 Steven returned to perform the Beethoven Violin Concerto with the Orchestra.  You can hear that performance by clicking on one of these links:  Beethoven Mvt1;   Mvt2&3.