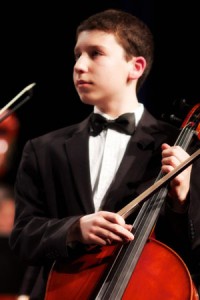 Oliver Herbert (cello), as the 2013 winner of our Young Artist Competition at age 15, amazed us with his performance of Schelomo by Ernest Bloch—his solo concerto debut. We enjoyed him so much he returned in 2014 by popular demand to play Tchaikovsky’s Variations on a Rococo Theme, giving us two wonderful opportunities to hear a phenomenal young cellist at the beginning of his solo career.

Oliver studied music with Iris Pingel, Peter Wyrick, Kay Stern, with The Parker Quartet and at the Ruth Asawa San Francisco School of the Arts where, as a junior, he performed in the Castro Theatre as part of a celebratory concert for Benjamin Britten’s 100th birthday. After attending the Yellow Barn Young Artist Program, Oliver embarked on a U.S. tour with the National Youth Orchestra as principal cellist, performing in such venues as Carnegie Hall, Seiji Ozawa Hall, and Walt Disney Hall. He was awarded second place in the Stulberg International String Competition and first place in the Irving M. Klein International String Competition. In November 2015 he was featured on the public radio program “From the Top.” At 16, Oliver began studying with Clive Greensmith at the Colburn School Young Artists Academy in Los Angeles, where he was seated as principal cellist of the Virtuosi Chamber Orchestra. He then entered the Curtis Institute of Music in Philadelphia. (Resume updated by Concerto Committee in 2016 from reliable online sources.)