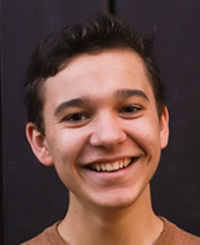 Jacob Reed, was the co-winner of the 2019 Concerto Competition.  He exhibited a remarkable talent at an early age which he demonstrated in an astounding performance of Prokofiev’s Sinfonia concertante. At age six, Jacob taught himself to read music and play the piano, and at 11, he learned to play the cello by watching YouTube videos of famous cellists. He began his formal musical training in 2015 with Eric Sung at the San Francisco Conservatory of Music. He was Associate Principal Cellist in the prestigious San Francisco Symphony Youth Orchestra for three years. At age 16, he was named Principal Cellist in the Tanglewood Youth Orchestra when attending the Tanglewood summer music institute, sponsored by the Boston Symphony. He went with the San Francisco Symphony Youth Orchestra on its European tour in the summer of 2019. Also in 2019, he won the strings competition for the 16 to 21 age group, sponsored by the ENKOR Int’l Music Competition.

Jacob’s talents include singing, performing at Carnegie Hall in 2019 with the Monte Vista Concert Choir, which his mother directs. Jacob has appeared on NPR’s From the Top, including a music video with the classical/jazz/big band fusion ensemble Pink Martini. Jacob, the fourth of six children, attended Monte Vista High School in Danville with plans to continue his music studies.