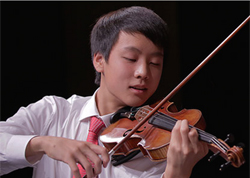 Andrew began studying violin when he was eight with noted violinist Li Lin at the San Francisco Conservatory of Music. Then he was granted a scholarship to study with Zhao Wei, internationally known recording artist, at the Conservatory’s Pre-College Division.

No stranger to winning challenging competitions while in high school, Andrew won third prize at the New York International Artists’ Competition, which gave him the opportunity to perform at Weill Recital Hall at Carnegie Hall. Other remarkable accomplishments include grand prize at the Korea Times Youth Music Competition in San Francisco in 2013, first prize at the Pacific Musical Society Competition, the International Music Competition of the Chinese Music Teachers Association of Northern California, and the Young Artist Competition sponsored by the Korean American Music Supporters Association. He has been invited to perform at the prestigious Junior Bach Festival in Berkeley.

Also a passionate orchestral and chamber musician, he was in the first violin section of the San Francisco Symphony Youth Orchestra beginning in 2011, and became Associate Concertmaster in 2014. He has been Co-Concertmaster of the KAMSA Youth Symphony Orchestra. Andrew attended the Music@Menlo Chamber Music Institute for two summers as part of its Young Performers Program, and he actively plays chamber music as a member of the Cambiata String Quartet.  In 2015, his ShadowHill Trio won the Santa Cruz Baroque Festival’s youth chamber music competition. Andrew’s other passions include math and taekwondo competitions. (Resume updated by Concerto Committee in 2016 from reliable online sources.)