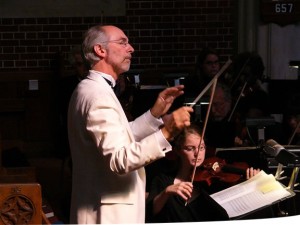 Music Director Eric Hansen and The Prometheus Symphony Orchestra present our concert series for the 2013-2014 , featuring well-established favorites as well as innovative works that are deserving of concert performance. We frequently feature local artists as solo performers to create the uniquely effective and powerful interplay of single instrument and orchestral ensemble.

The all-volunteer community-based Orchestra, located in Oakland, California, is devoted to the rehearsal and performance of master works of the symphonic repertoire. Founded in 1965, the Orchestra is currently associated with Merritt College of Oakland, California, a campus of the Peralta Community College District. This is our forty-ninth season of offering concerts to the Oakland Community.

There is no admission fee for our concerts but donations are always graciously accepted. Orchestra expenses are met by generous donations from players and the public. Help support the Prometheus Symphony OrchestraHERE.

**You can also help support the Prometheus Symphony Orchestra by purchasing an ad in our program to publicise your business or honor someone.
Our rates are very reasonable. You can get more information HERE or send email toinfo@prometheussymphony.org

If you would like to be notified by email of upcoming Prometheus Symphony events, please send email to:
info@prometheussymphony.org with the words: “Add to Mailing List” in the Subject line